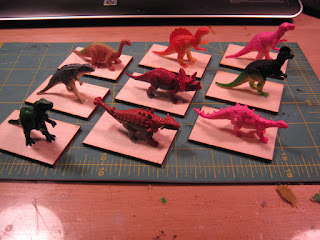 I started playing roleplaying games when I was in grade school. At the time, if you asked me about my favorite things to play with, the short list would have been books and comics, D&D, Star Wars figures, or dinosaurs and army men. All of these had one thing in common - they let my friends and I use our imaginations and escape to other worlds and play out the imaginary exploits of fantastic characters.

Dinosaurs and army men started with setting up and moving little plastic figures around, often creating some kind of rules or structure that determined how specific kinds of models could be positioned or move. Eventually this evolved into creating games that would play perfectly well as a one-off at any of the big gaming conventions today. We were all budding game designers, testing mechanics and playing games until we found the perfect combination that yielded the most involvement and fun for everyone playing.

A few weeks ago, a friend and I were at a family fun center that had a decent arcade, mini golf, go karts, and so on. I ended up playing some skee ball, which resulted in a couple of pockets full of tickets. Like most arcades, this place lets you exchange your tickets for a variety of cheap toys. Looking through the possibilities, I found bins full of plastic army men and little dinosaurs. I grabbed a handful of each and joked that I was going to go home and play army men versus dinosaurs.

When I got home, I took a look at the pink, orange, and green dinos and realized that they were actually a good size for facing off against 10-20mm figures. So I mounted them on some Litko bases, gave them a quick painting, and textured the bases. What started as a joke, recalling some of the childhood games that eventually led me to miniatures gaming, has now come full circle. I'm taking the dinosaurs, along with some of the 10mm World War I British troops I have and knocking together a quick game of dinosaurs and army men. I'll let you know how it goes. In the meantime, here's the painted dinos in all their glory: 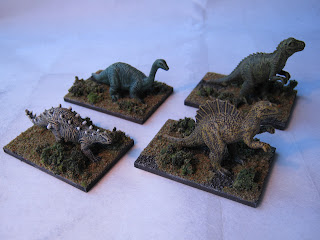 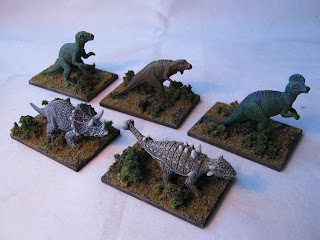 These were painted with a variety of acrylic paints over a black primer. They are mounted on 40mm x 60mm Litko bases.

PDF
Posted by Robert Morris at 9:59 AM