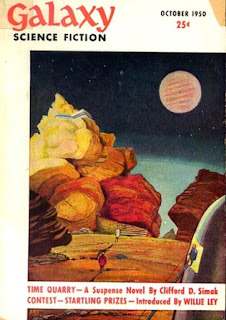 Last week, I was home sick dealing with a case of walking pneumonia. In between trying to sleep and trying to cough enough to clear my lungs, I was lucky to be home to receive a few very large packages.

A couple were Kickstarter rewards. Two of the larger ones, though, contained quite a few issues of Galaxy Science Fiction magazine from the 1950s and 1960s.

A few years ago, I was able to buy about twenty mixed pulp mags for around a dollar each. Most of those happened to be Galaxy, so I started doing some reading, both in and about the magazine.

Galaxy turns out to be one of the longer-running science fiction pulp magazines. They started publishing later than a lot of the other science fiction pulps, but had continuous printing from October 1950 until 1979. The magazine ran monthly until 1959, then bi-monthly until 1968. From then until 1978 it was published at an often-shifting rate, sometimes monthly for a stretch, often bi-monthly, and in the end quarterly. The final issue of the original series was published in 1980 as Volume 40, Number 1. There was a brief attempt to revive the title in 1994, with a short bi-monthly run that lasted from January 1994 to March 1995.

The quality of Galaxy was consistently fairly high judging by the issues I have. They apparently paid a bit more than other science fiction magazines, so they were able to attract some great writers, including Ray Bradbury and Robert Heinlein. Bradbury published his first version of Fahrenheit 451, "The Fireman" in the magazine. For all of the Appendix N readers, they also published stories by L. Sprague de Camp, Fritz Leiber, and Jack Vance.

Until this week, I had 13 issues in my collection. Fortunately that included the first three issues from 1950. With some judicious eBay buys, I have managed to fill out my physical collection with quite a few other years of the magazine. So far I have all of the issues from 1959, 1963-68, and 1970. I have a smattering of issues between 1951 and 1958, and none from after 1970. I am waiting for all of the issues from 1961 and 1969 to be delivered. Looking at the quality of the contents alongside the costs of most issues on eBay and elsewhere, I am looking to collect the entire run, including the issues from 1994-95. If anyone has issues they are willing to part with for a reasonable price, drop me a line. I may be interested in taking them off your hands.

I intend to read through them in pieces and work on some things with them here. First, I plan to post some reviews of individual stories or issues. Second, as I read, I'm taking some notes that will eventually tie in with my Appendix N project. Those stories that I find particularly inspiring, I'll add to the list. Third, before anything gets added to the list, I am going to work out some gameable material from it and post it here.

If you want to read along or just check out Galaxy, issues are available in electronic form (along with quite a few other pulp magazines) at the Internet Archive. []

PDF
Posted by Robert Morris at 6:00 AM