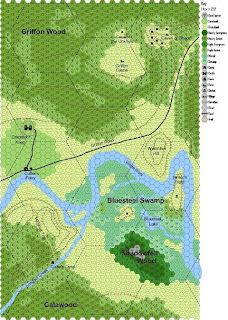 I have been using the computer for mapping for quite a while. I started mapping on the computer using MS Paint in the early 90s, migrating quickly to Photoshop and specialized mapping programs. When TSR released the Core Rules CD, I used the Campaign Mapper tool, a sort of Campaign Cartographer light. Eventually, I graduated to using Campaign Cartographer 2 with its various add-ons exclusively for mapping. At one point, I considered myself a fair mapper with the program, even contributing some maps to the Forgotten Realms Atlas project.

Now that I'm getting back into gaming regularly, I decided to take a look at the mapping software that is available. I needed something I could use fairly easily to produce good quality, usable maps for my games. Eventually being able to produce publishable maps would also be a plus, as I am hoping to develop some of my adventure ideas and publish them.

Being familiar with Campaign Cartographer from past experience, I decided to upgrade and try CC3. I quickly realized that this was not the same as CC2. The program produces beautiful maps, but the learning curve is much steeper than I remember, even with the excellent help of Allyn and the rest of the folks at the forums.

Next I tried uninstalling CC3, reinstalling CC2, and going back to what I know. Once again, I was intimidated by the learning curve involved. Apparently, I have forgotten too much over the past ten years to really use CC2 effectively right now. And, although I can probably relearn that stuff, I'm not sure I want to. I don't really want to spend that much time relearning how to make passable maps. Again, I was in a quandry.

Finally, after checking out some of the blogs online, I found Hexographer. I tried it a few times online, and then decided to spring for the license so I could use it offline. To put it plainly, this program does everything I need an overland, hex-based mapping program to do. It allows me to produce high-quality, visually appealing maps with a minimum of effort and a very small learning curve. For the mapping I have done and for this review, I am using version 1.40g+, which I believe is the most current version.

I started using the program on my old desktop, which has an AMD dual-core processor and plenty of RAM. Unfortunately, my monitor went belly-up a few weeks ago, and I have reinstalled it on my old laptop. Said machine has a Pentium 3 850 mhz processor, a 12 gb hard drive, and only 384 mb of RAM. Not exactly a screaming beasty, but it handled the program fine. It took about 30 seconds to load and then worked smoothly throughout all of the mapping I have done so far. The largest maps I have worked on have been 80 x 60 hexes, with each hex having 48 x 42 pixels, but it has handled them well, including scrolling, resizing, and zooming. So, needless to say, at least on my system the program has not been a big resource hog. This is a dramatic difference from most of the other graphics programs available which, if they would even run on the system, would be severely hampered by the lack of resources.

When I first opened the program, I was a little bewildered by all of the settings available. I'm not really big on reading instructions or doing tutorials, so I just jumped right in and started pressing buttons.

I soon found out that from the first control, you determine most of the characteristics of your map. You can control the width and height of the map by number of hexes and the width and height of each hex. You can also decide how you want the hexes oriented on the page. (I generally stick with True Columns, since that gives good vertical lines of hexes like the old Greyhawk maps, but I have seen some great maps that use True Rows as well. Just the fact that the option is available is great.) Under terrain settings, you can opt to have the program generate a random map based an three preset configurations, generate a random map based on your own calculations, or generate a map with one solid type of terrain, including blank. Finally, you have the option of loading a map that you or someone else has already created and/or impoting a png image of a map as a background to trace.

Once you decide all of these factors, you get into the meat of the program. A new window opens, displaying the map based on the settings you chose on the first control. In a sidebar on the right, you have tabs with the options available for placing terrain; placing symbols for various settlements or points of interest; a set of cosmic symbols for drawing star maps; drawing lines for roads, rivers, elevation, shipping lanes, etc.; placing text on the map; or other items.

Placing terrain is as simple as clicking the symbol you want on the Terrain tab and then clicking the hex where you want the symbol. It's possible to adjust the size, color, placement within the hex, and even the graphic used for each terain type by digging into the menus at the top of the window. I ignored these customizations for the most part, because the symbols available are fine for most of the mapping I need to do. I did add a new terrain type for the ant lair map I made, and it was simple and intuitive to do. 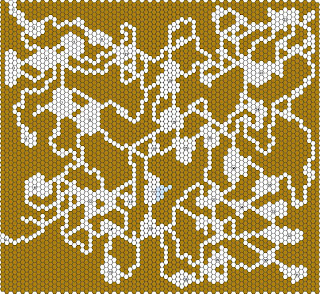 The Symbols tab gives plenty of different symbols you can throw into the map over the terrain. Unless you change the default settings, the symbols are scaled to fit inside the hexes and over the terrain. You have the option of putting any symbols you place on a GM only layer in your map so you can hide them from your players. You can change the color of symbols, as well.

The Cosmic tab functions like the terrain tab but has map symbols for space-related items like black holes, various classes of stars, nebulae, etc. You can customize the colors of these elements, and there's also the option to give them rings in various colors. These can be placed on a GM only layer as well.

The Lines tab has specifically-styled lines for borders, coastlines, roads, rivers, trails, elevation, and shipping lanes in both freehand and snap-to-vertex styles. It has controls for inverting hashes on the lines (good for inverting the slope of elevations), starting a new line, removing the last point placed, and so on. To place lines on the map, you click the kind and style of line you want and then start placing points for that line with clicks on the map. If you want to start another line, simply repeat the process. The lines tab also has a sub-tab available where you can develop your own styles of lines for your maps, including the color, width in pixels, style (dotted, hashed, etc.), and type (political, infrastructure, or natural). I generally did better using snap-to-vertex lines, but I was drawing my maps using a touchpad on a laptop. I'm sure I could have done better freehand using a mouse or pen tablet.

The Text tab has some preformatted styles of text or you can go to the sub-tab and generate your own custom text. For text, select the preset or describe your text, then type the text you want on your map in the available text box on the tab. Then click on the map where the text should go. Where you click is the bottom left of the text. Once it is placed, you can move it or rotate it. You can also change the content of the text by changing what is in the text box. Once you have what you want, you click save and it locks it in place on the map.

The Other Items tab is primarily for making overhead battle maps. There are a number of features available for including in the map, including various buildings, trees, rocks, etc. You can also add your own elements by using the customizing features in the program menus. Anything you add can be scaled, recolored, and textured as well. This looks like a great feature set in the program, but I'm not at the stage where I need battlemats, so I haven't really used it.

That's the gist of the program right there. Each tab also has a Delete button. To get rid of anything on the map, simply go to the tab that controls that item, click the delete button and click what you want to remove.

As I said in the beginning, this program does everything I want it to. It generates old-style solid hex terrain maps quickly and easily. I tried a few experimental maps to get a feel for the controls. Then I generated a couple of maps with it from start to finish. Overall, the most complex map I generated (my Borderlands map shown at the top of the post) took me about three hours, including figuring out some of the controls I hadn't used before. Once I finished mapping, I was even able to use the program to export my maps as pngs for use elsewhere. I exported my maps as pngs, filled the transparent areas with white using GIMP, and then saved them as jpgs for posting. Easy as pie.

You can use the program for free at the Hexographer website. You can also pay to get a Pro version license that allows you to run the program offline and gives you a few extra features like map notes, map keys, and more. At the time of writing, a one-year license is $9.90 USD and a lifetime license is $28.75 USD. Joe will email your key to you within 24 hours.

There is a forum for the program, and the support from Joe is outstanding. I didn't have access to my old key file when I switched computers, and he emailed me the file in a couple of hours. Excellent support in this age of general apathy.

There are a ton of other features available in the program, but you get the idea. I love this program and will definitely keep using it. It works well, looks good, and costs almost nothing. Get a lifetime license, already!